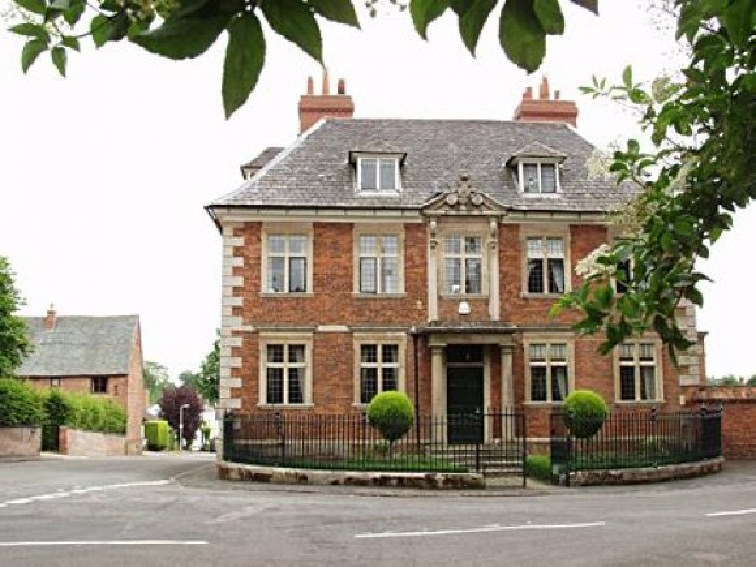 The Old House stands at the junction of Albert Street and Main Street in Kibworth Harcourt. The house, dating from 1678 and the garden walls are Grade 1 Listed Buildings. The house is a red brick building with stone dressings and is remarkable for its period, both because of the use of brick is early for this district and as an example of the fully developed Renaissance house which is rare in Leicestershire before the beginning of the 18th century. The house consists of two stories, cellars, and attics. It is approximately rectangular in shape with a Swithland slate hipped roof with brick ridge stacks, dormer windows, and a symmetrical front. Built in red brick with coursed rubble stone plinth rusticated stone quoins, stone dressings and band and moulded stone cornice. The mullioned and transomed windows are surrounded by moulded stone architraves and there are two small oval lights in the centre of the north wall facing Albert Street. The front of the house faces west onto Main Street and has five windows to the first floor, the central one being flanked by pilasters and surmounted by a scrolled pediment containing a coat of arms. Below the pediment is the date 1678. The Coat of Arms (three escutcheons each charged with a pheon) is possibly the arms of the Parker family (see The Parker Family of Kibworth Harcourt part 4-early modern).  The central doorway, which might be a later addition to the house, has a rectangular open stone porch with three stone steps, two Tuscan columns supporting an entablature with plain frieze and blocking course.

At the front of the house is a semicircle of iron railings on a stone plinth, a pair of gates with spear head finials with urn finials at intervals. These railings were added to the house circa 1773.

The house has a very fine interior staircase with twisted balusters and some original paneling.

The garden walls, approximately 2 meters high extend from the rear of the property along Albert Street and from front right corner along Main Street. The wall was built in 1862 along with an extension to the rear of the house.

During the years 1890 to 1895 The Old House was connected to the water and gas supply.