The Foxton Family of Kibworth 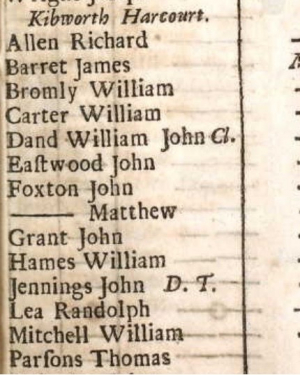 The first recorded trace of the Foxton family in Kibworth was the birth of John Foxton in 1571. He was the son of Samuel Foxton born 1530 in Leicester. John married Annis, born, c1575, in Kibworth Beauchamp. They had four daughters and two sons; Richard born 20 Nov.1609 and William born1613 who died in the year of his birth. John Foxton died leaving a will dated 29th August 1767 and Annis died in1635. Their son Richard Foxton lived in Kibworth Beauchamp and in 1646 married Agnes/Ann born 1626 in Leicestershire to parents’ unknown. Together they had eight children including Matthew born 1648. In 1673 Matthew Foxton married Jane Fox born1652 in Kibworth Beauchamp and they had four children: Ann born 1674, Elizabeth born 1676, Elisabeth born 1668 and John born 18th December1685. 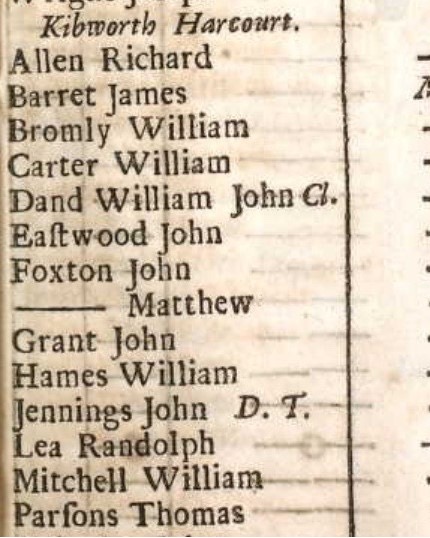 The thirty second report of the commissioners appointed in pursuit of the Act appointing Commissioners to continue the inquiries concerning Charities in England and Wales: Township of Kibworth Harcourt

Matthew Foxton of Kibworth Harcourt by WILL dated 3d Jan 1721, and proved at Leicester 1723 devised a half yard land in Kibworth Harcourt be divided equally between his two grandsons, and charged one share theof with the sum of 5s. per annum for the use of the poor of Kibworth Harcourt and the other share with the like sum of 5s to be paid on the feast day of St. Matthias for the like poor and to be distributed among them at the discretion of his heir-in-law for the time being and the minister of the parish church and the churchwardens of the town of Kibworth Harcourt forever. One share of his land was inclosed under the Kibworth Inclosure Act and the Commissioners, by their award, dated 14 July 1780, allotted to Elizabeth Wright in lieu of her property therin, a piece of land in West Field, Kibworth Harcourt, containing 4a. Or. 38f.

The present owner of this allotment is Samuel Lamon of Kibworth Harcourt who distributes the sum of 5s. on the 24 February among old and impotent poor persons of the township. The Commissioners could not obtain any information regarding the other 5s. per annum or the land upon which it was charged. 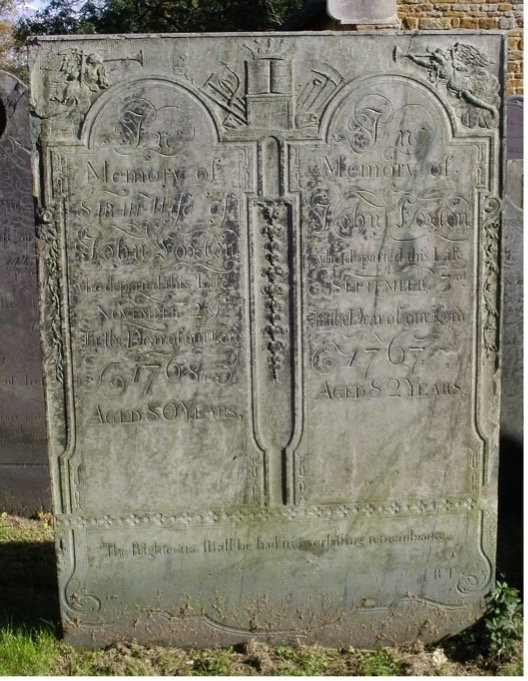 George Foxton, Gentleman and Lord of the Manor was a much-respected man by his tenants and acquaintances but unfortunately he suffered from a serious nervous complaint which for many years left him dependant on others to survive. George Foxton’s wife, Elizabeth, died in March 1784.

It is likely that Rev. Thomas Thomas, who had been living with the Foxton family from 1788, supported and cared for George Foxton, who may have been suffering from dementia. George Foxton died on 6th December 1794.

The Gentleman Magazine 1794 reported his burial as follows: 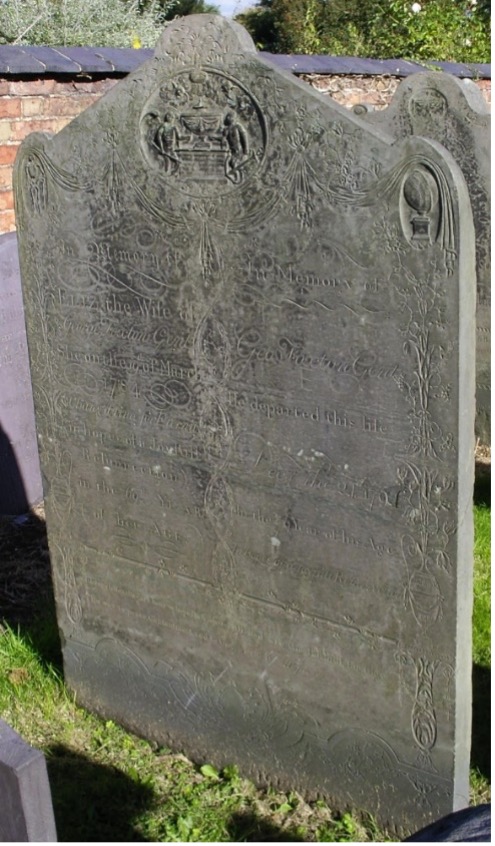 In memory of ELIZABETH the wife of GEORGE FOXTON Gent She died on the 19th March 1784 in hope of a joyful Resurrection in the 60th year of her age In memory of GEORGE FOXTON Gent He departed this life Dec 24th 1794 In the 79th year of his Age in hopes of a joyful Resurrection through Death’s dark horn we hope she safely trod: Blessed are the faithful for they (illegible) The way to peace, Contentment and to God. Rest in hope.

There is a plaque commemorating the lives of Rev. Thomas Thomas BD and his wife Elizabeth (nee Foxton) in St Wilfrid’s Church, Kibworth; 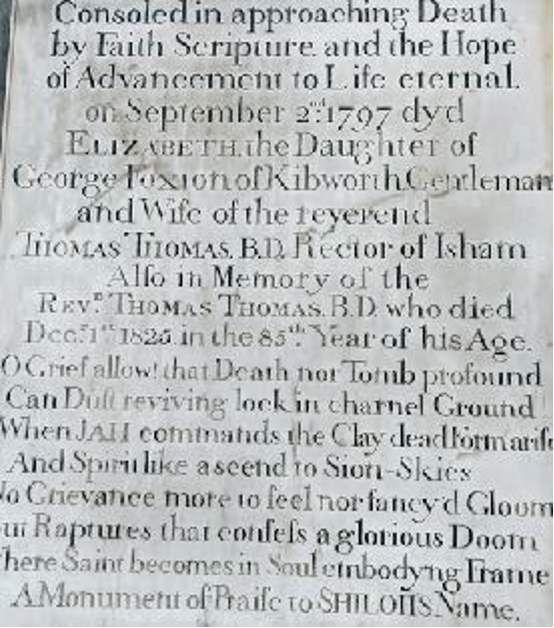 Consoled in approaching Death by Faith scripture and the Hope of Advancement to Life eternal on September: 1797 dyd Elizabeth the Daughter of George Foxton of Kibworth Gentleman and Wife of reverend Thomas Thomas. BD. Rector of Isham. Alfo in Memory of Revd. Thomas Thomas BD. who died Dec 1st 1825 in the 85th Year of his Age. O Grief allow that Death nor Tomb profound Can duft reviving lock in charnel Ground When JAH commands the Clay dead form arise And Spirit like ascend to Sion Skies so Grievance more to feel nor fancyd Gloom But Rapture that confess a glorious Doom Where Saint becomes in Soul embodying Frame. A Monument of Praise to Shiloh’s Name.

With the passing of Elizabeth Thomas and the marriage of Sarah Foxton to Robert Adams and this family living in Essex there were no members of the Foxton family left in Kibworth Harcourt.

Written by David Adams with research by Jeni Molyneux

Research by Jeni Molyneux in December 2019 at the Pembrokeshire Archives uncovered the copy of the ‘Schedule of title deeds’ kept by Rev Thomas Thomas and this pencilled list of ‘lease and release’=sale of property relating to the Foxton family:

Schedule of title deeds, relating to an Estate at Kibworth Harcourt and Kibworth Beauchamp in the county of Leicester regarding the property of the Reverend Thomas Thomas clerk deceased.

An Indre between George Foxton and Elizabeth his wife of the one part and Thomas Ward/son and heir of Thomas Ward deceased of the other part.

The Will of John Foxton

6th August 1794 The Will of the said George Foxton

Indentures of lease and release.

The release between Elizabeth Foxton of the 1st part the Reverend Thomas Thomas clerk of the second part William Peppin and John Johnson the third part and Thomas State and William Starked of the fourth part.

Indentures of lease and release. The release between John Foxton Adams, Robert Adams the younger, Poyntz Adams, Dorothea Oursley Adams and Elizabeth Adams (children of Sarah Adams deceased) of the one part and the Rev Thomas Thomas of the other part.

A n indenture between the said John Foxton Adams, Robert Adams the younger, Poyntz Adams, Dorothea Oursley Adams and Elizabeth Adams of the first part; William (W) Wartnaby of the second part, the Reverend Thomas Thomas of the third part, John (W) Wartnaby of the fourth part and John Arthur Arnold of the fifth part.