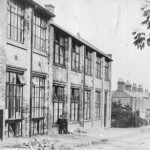 The two Kibworth villages developed distinct identities throughout the nineteenth century, based in large part on their different economic character. Kibworth Harcourt remained largely agricultural with a vibrant service sector based on provisioning the A6 traffic. Kibworth Beauchamp always had a more industrial character, from when the weavers predominated and this continued with industrialisation in the nineteenth century as factory production took hold in the village.

The differing economic chracteristics was also subtley reflected in the more "advanced" politics that developed in Beauchamp in contrast to the Tory dominance in Harcourt. This is evident in the choice of street names in the expanding Beauchamp village, with new streets named after the leading Liberal politicians of the late nineteenth century, such as Gladstone and Melbourne. These political rivalries sometimes also found expression in public bitterness, as evidenced in April 1897, when a suggestion that both parish councils co-operate in planning Queen Victoria's jubilee celebrations was decisively rejected at a Harcourt parish council meeting.

What is evident from reports of the meeting is that there was a general feeling in Harcourt that Beauchamp considered themselves more advanced in their civic efforts. The meeting instead agreed that Harcourt would build something permanent to mark the Queen's jubilee, with perhaps a village hall "emphatically asserting that Merton College, the lords of the manor, would have pleasure in giving the necessary ground."

On an earlier occasion, in 1885, when the new vicar, the ebullient Bangalore-born Merton man Edmund Knox, took on the ecclesiatical parish of Kibworth, the rivalry between the two Kibworths was one of the most striking, and challenging, aspects of his new living.

Beauchamp, he noted, the home of 'stockeners' and predominantly 'radical', was in stark contrast to Harcourt, 'the home of the sporting squirearchy and retired businessmen of Leicester'.

Between the two 'was kept up a half-playful antagonism', with even the most minor disagreement eliciting 'fiery eloquence' poured forth with 'passion such I had never heard in Oxford'.

On one occasion, he recorded:

The vestry debated warmly the plan of a sewer which was to run down a road that divided the two villages [Ed. A6]. It was even suggested, with a fine disregard of costs, that two parallel sewers should be constructed, that the sewage of one village should not be 'contaminated' by the waste of the other.