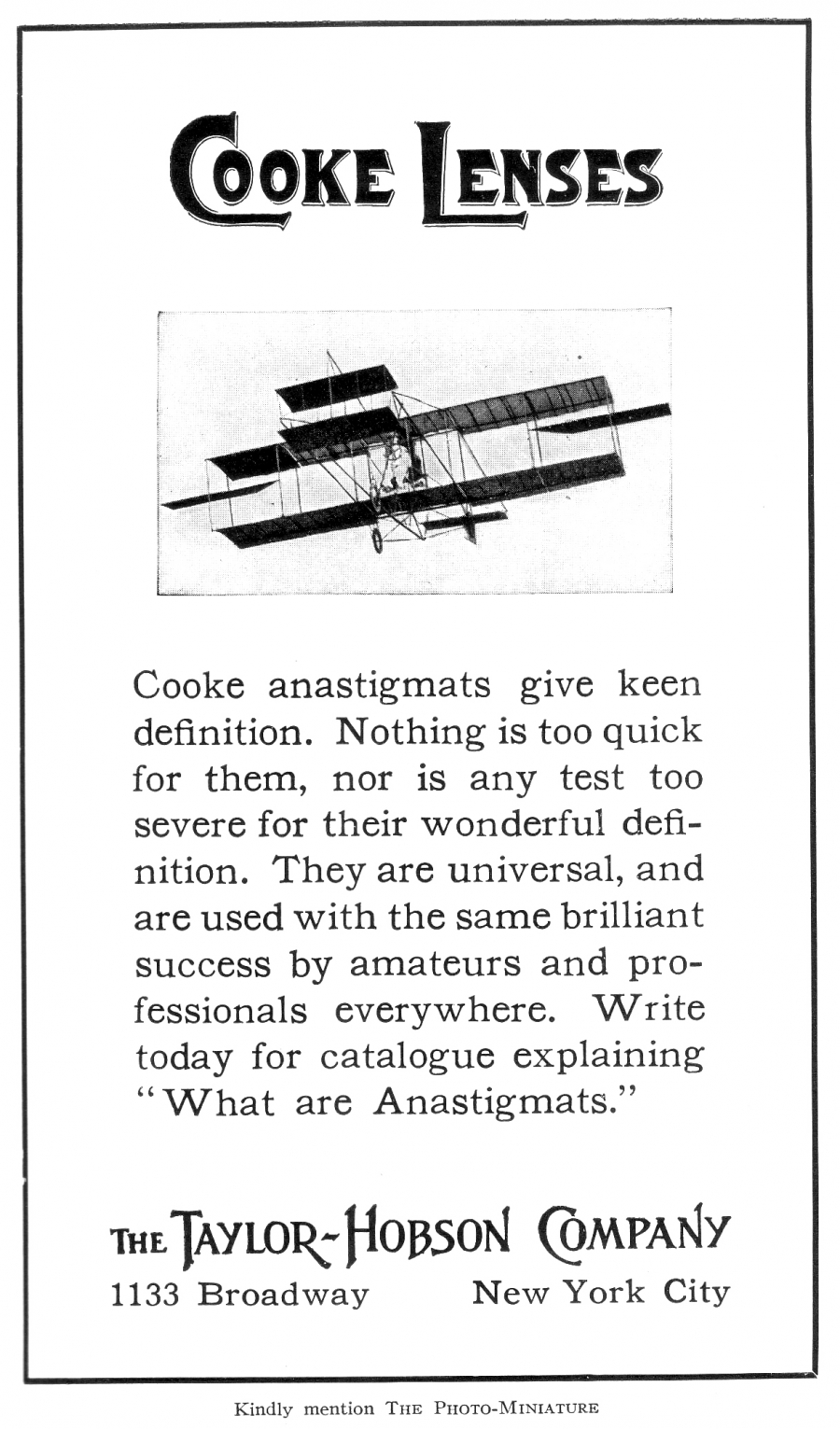 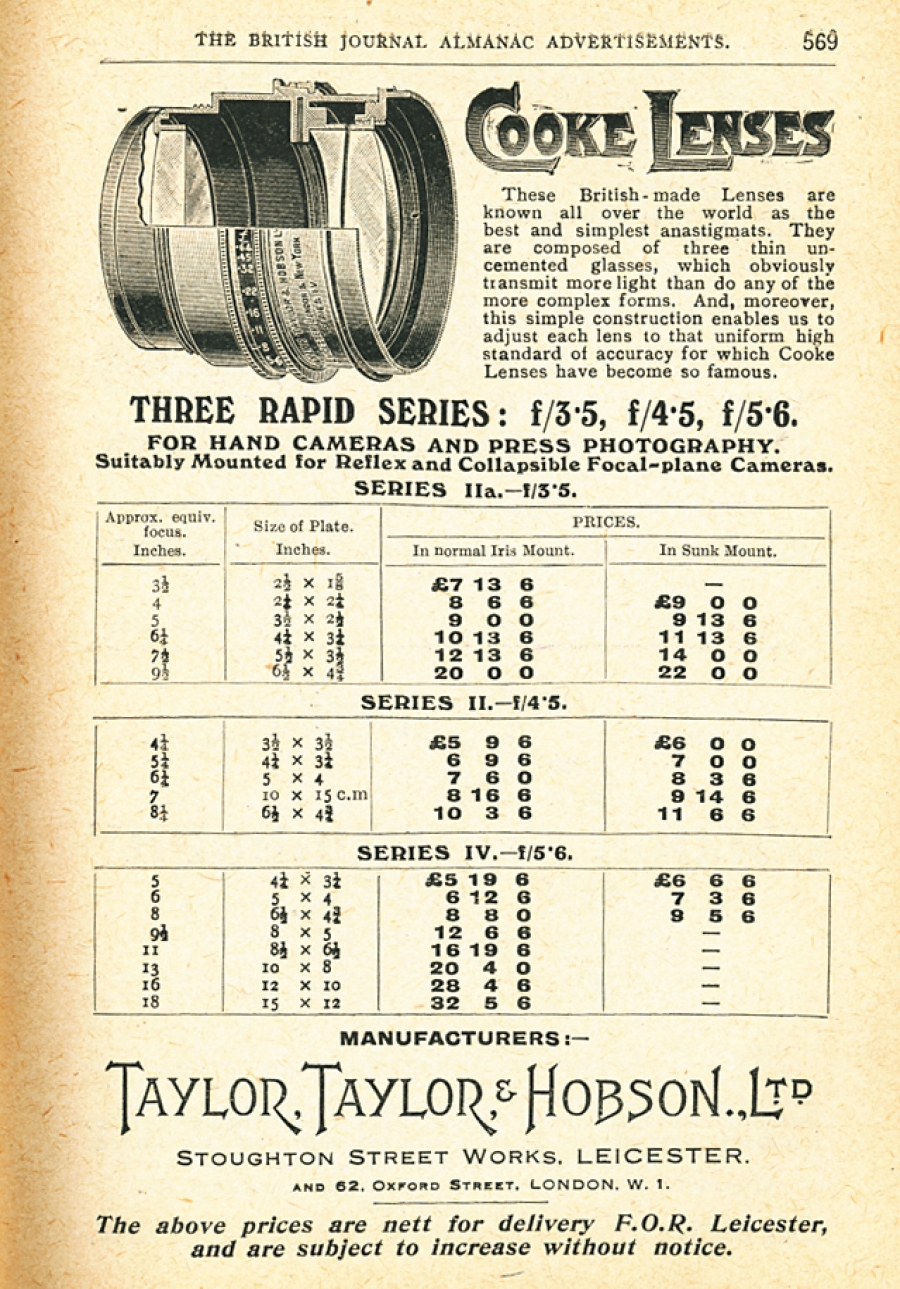 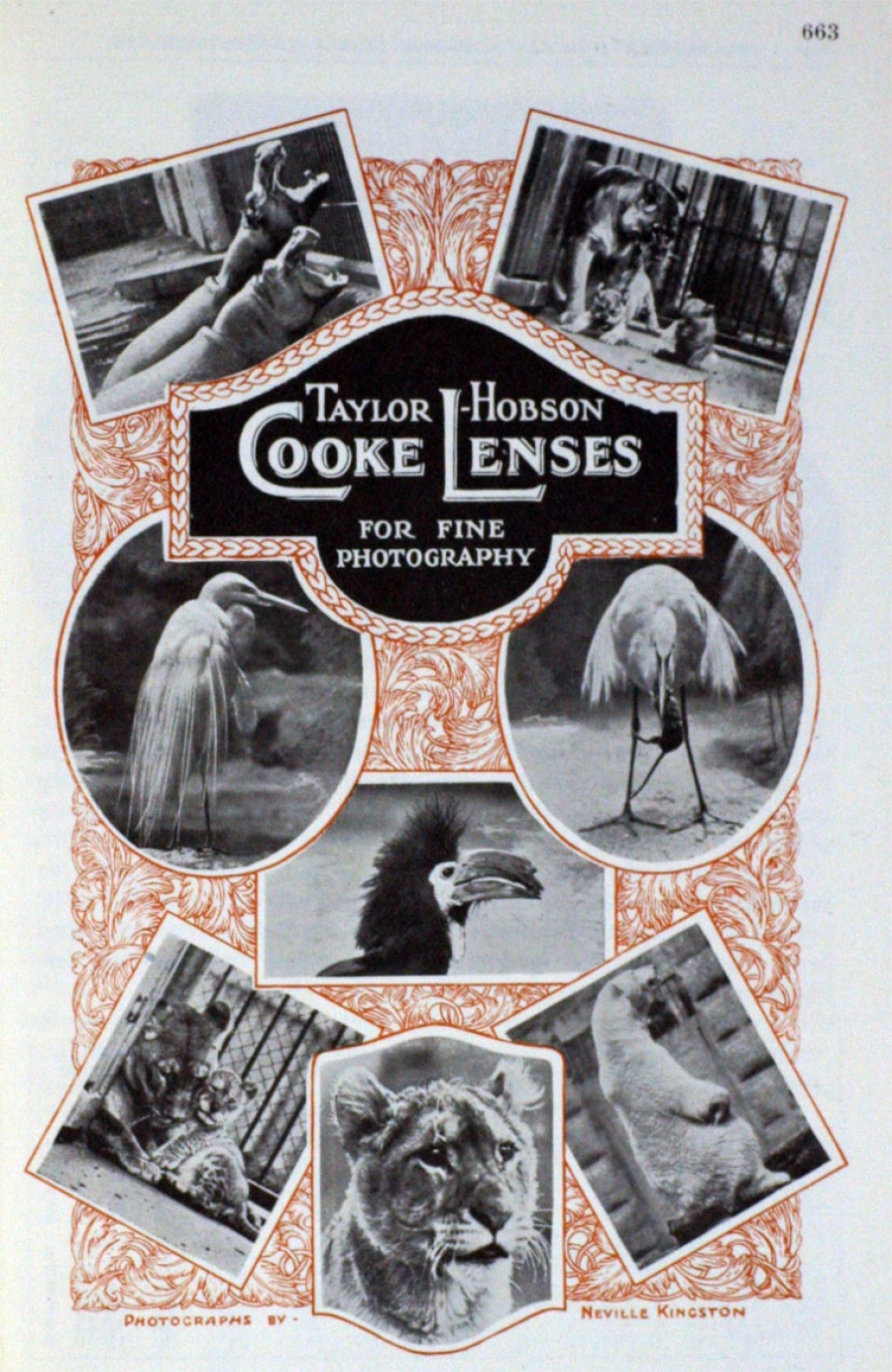 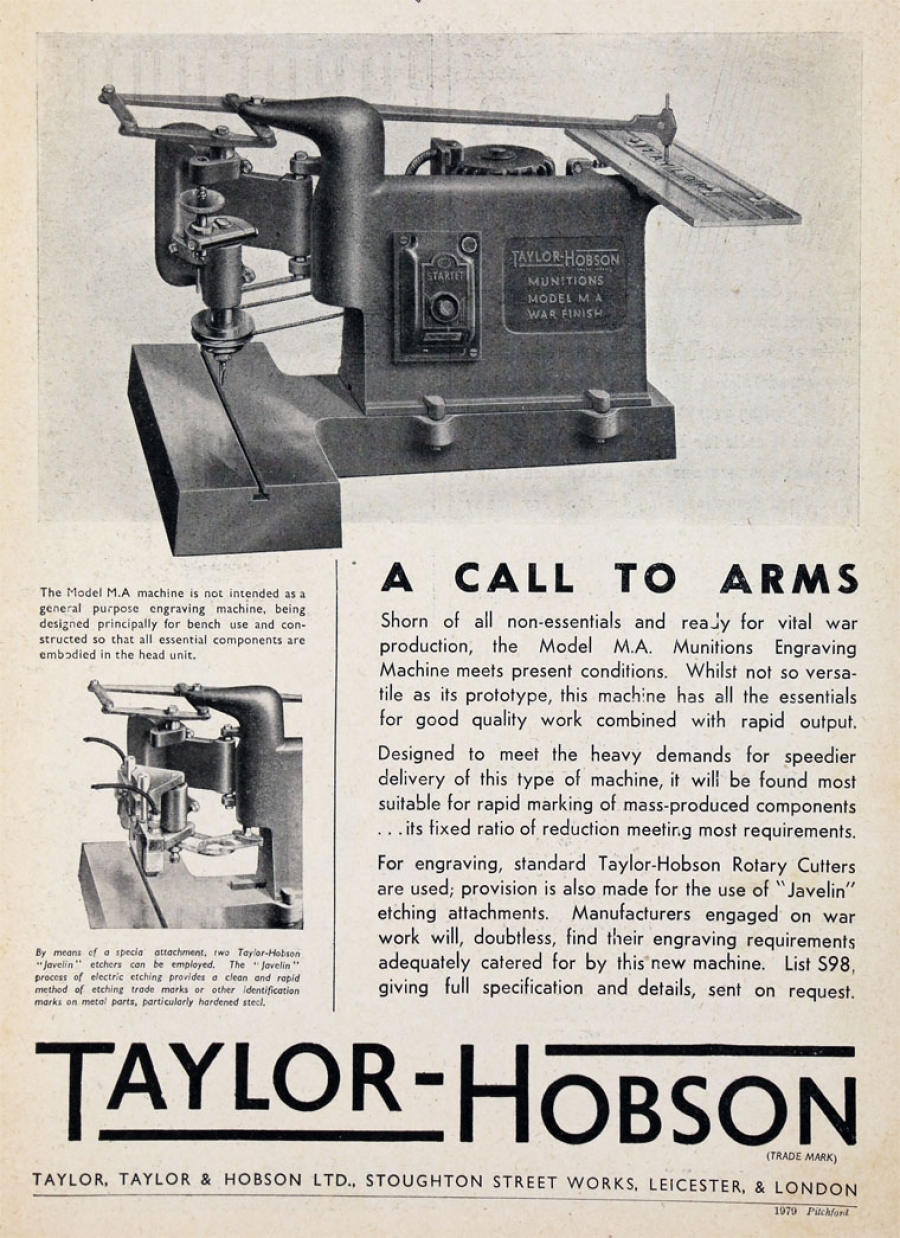 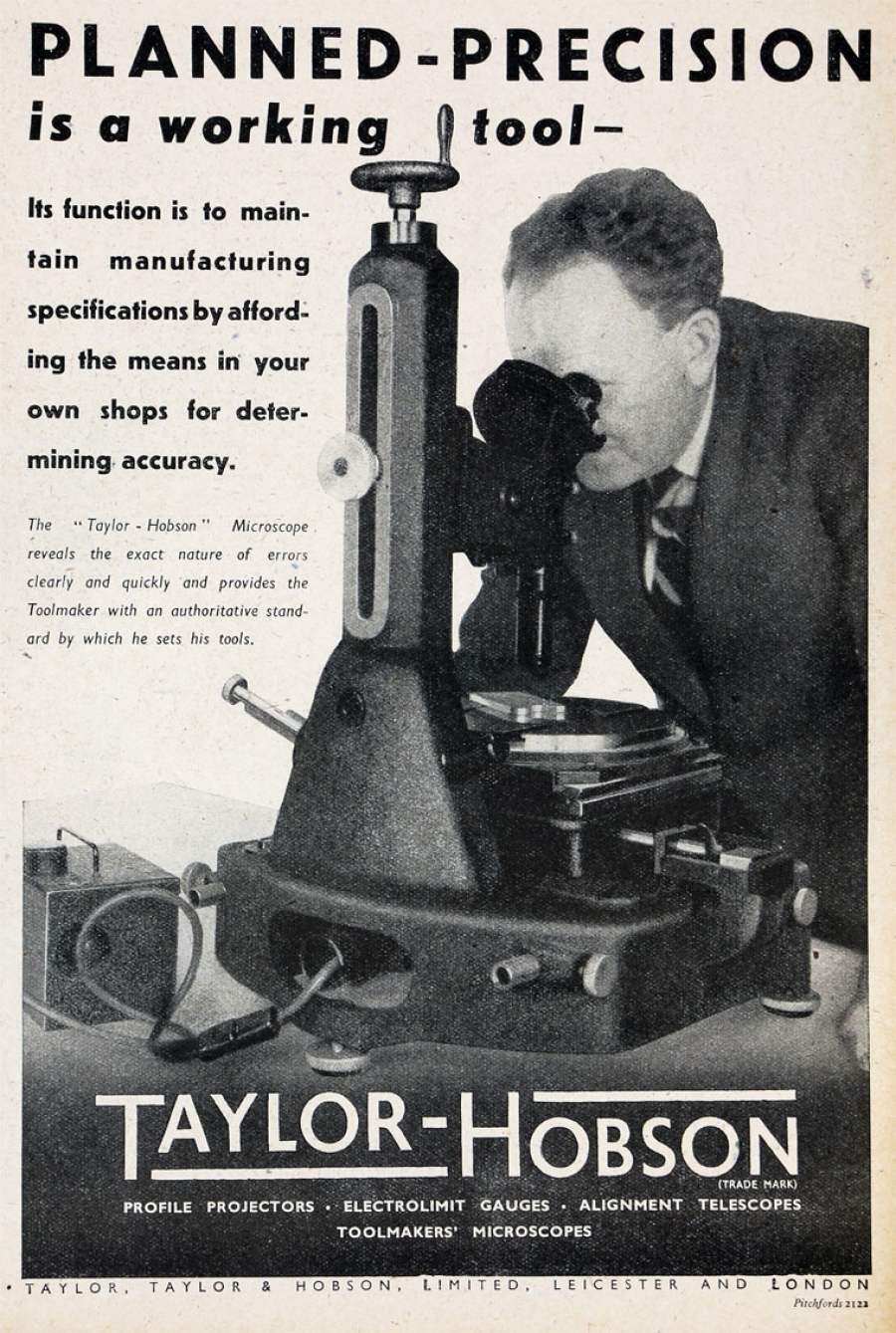 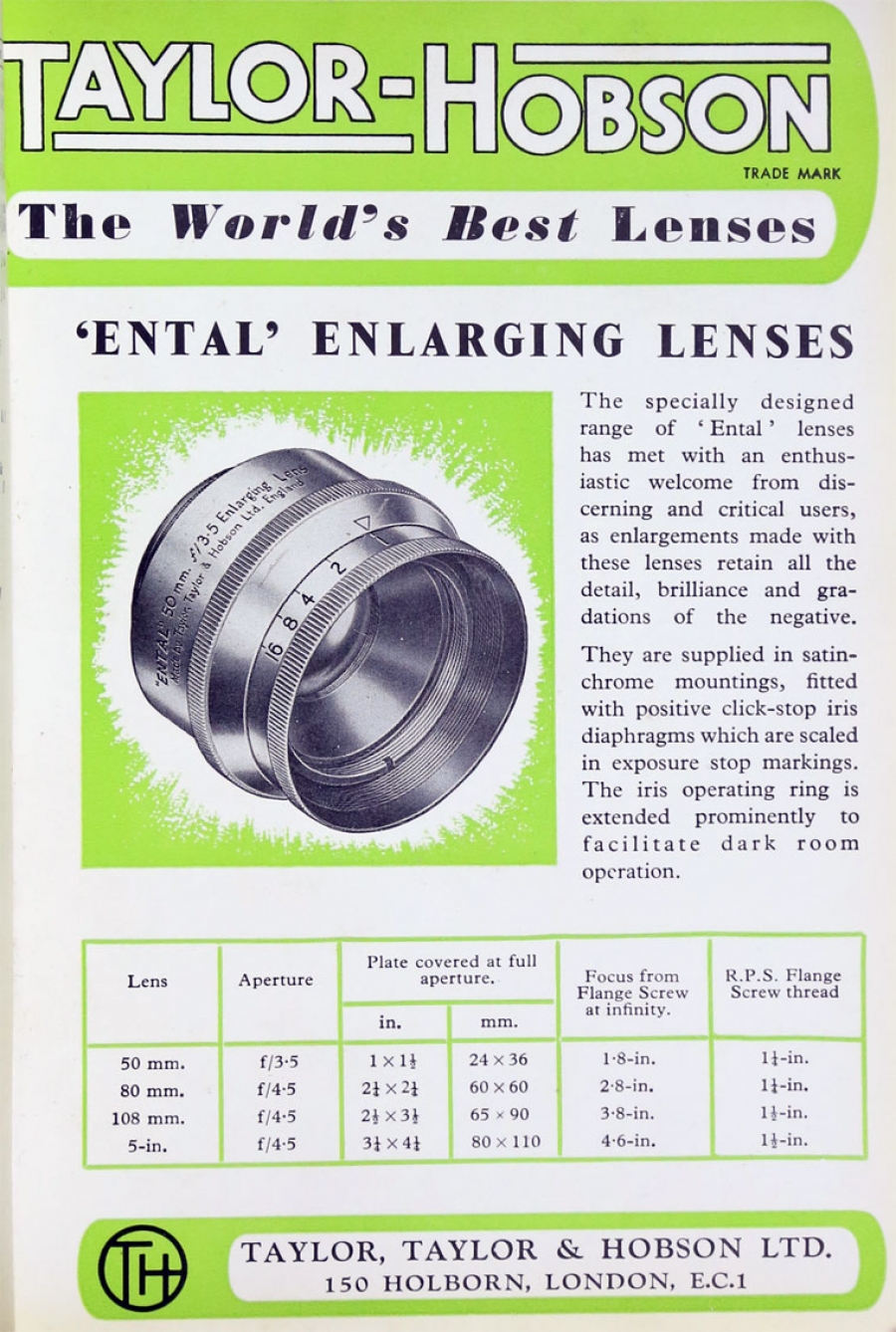 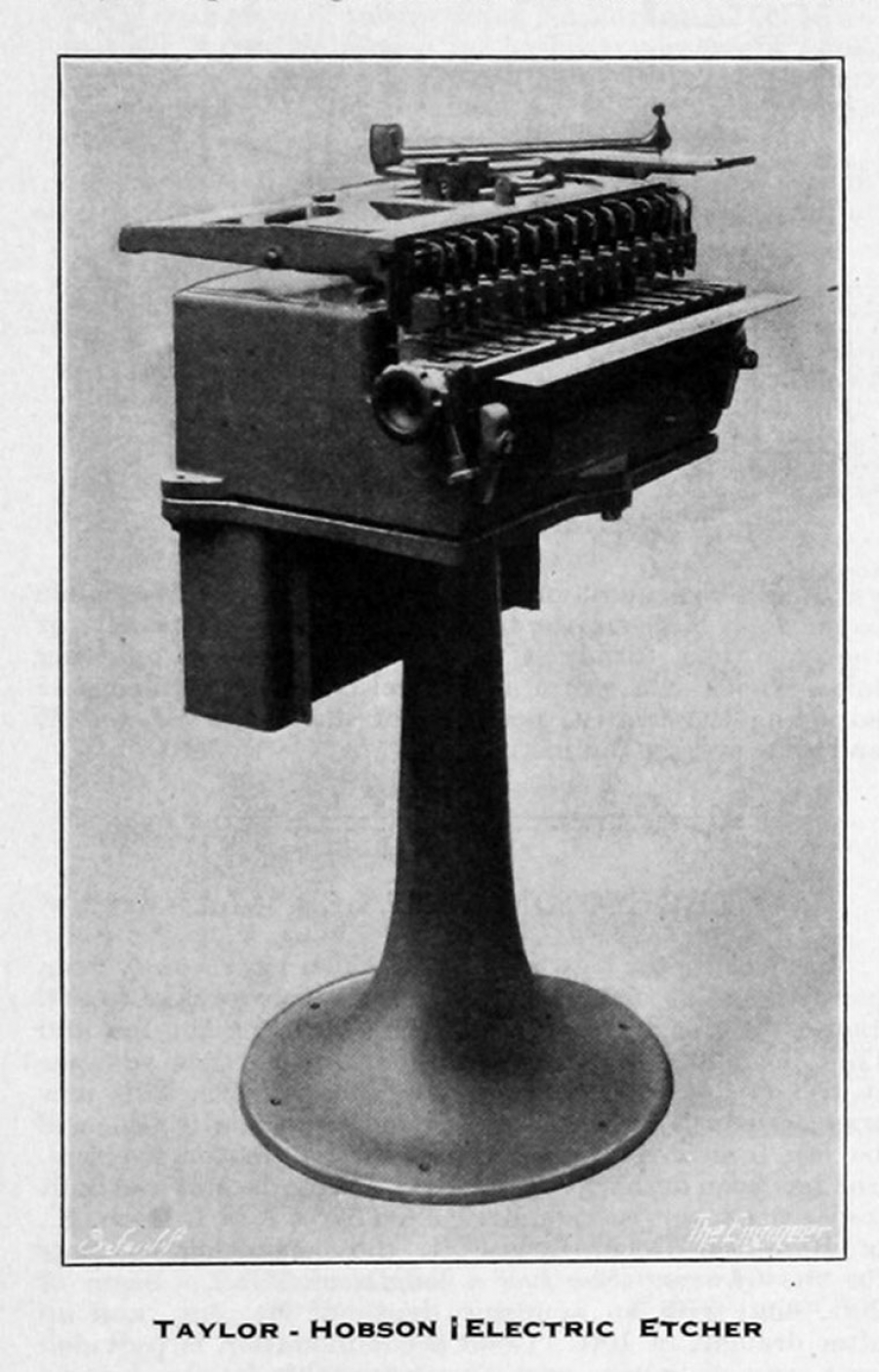 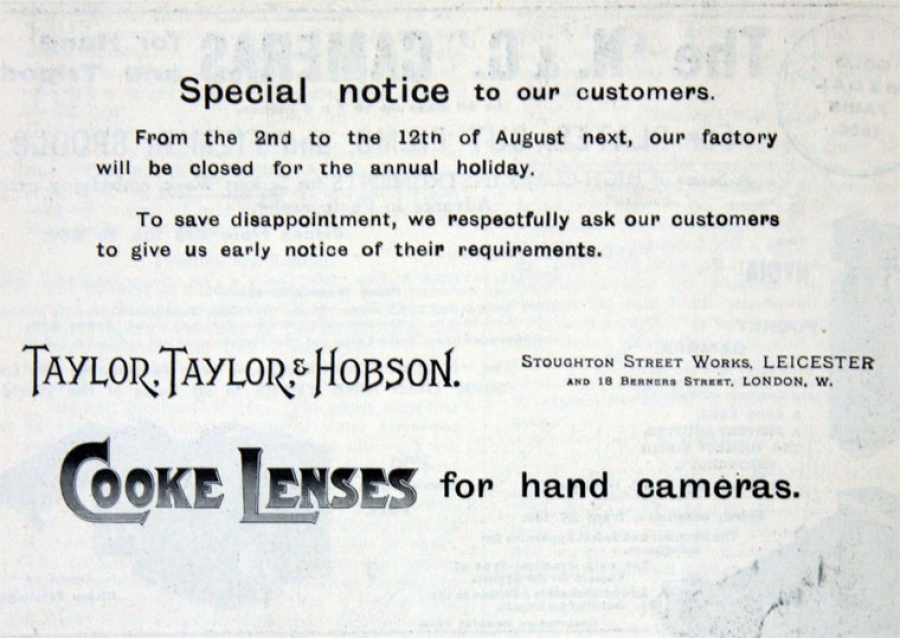 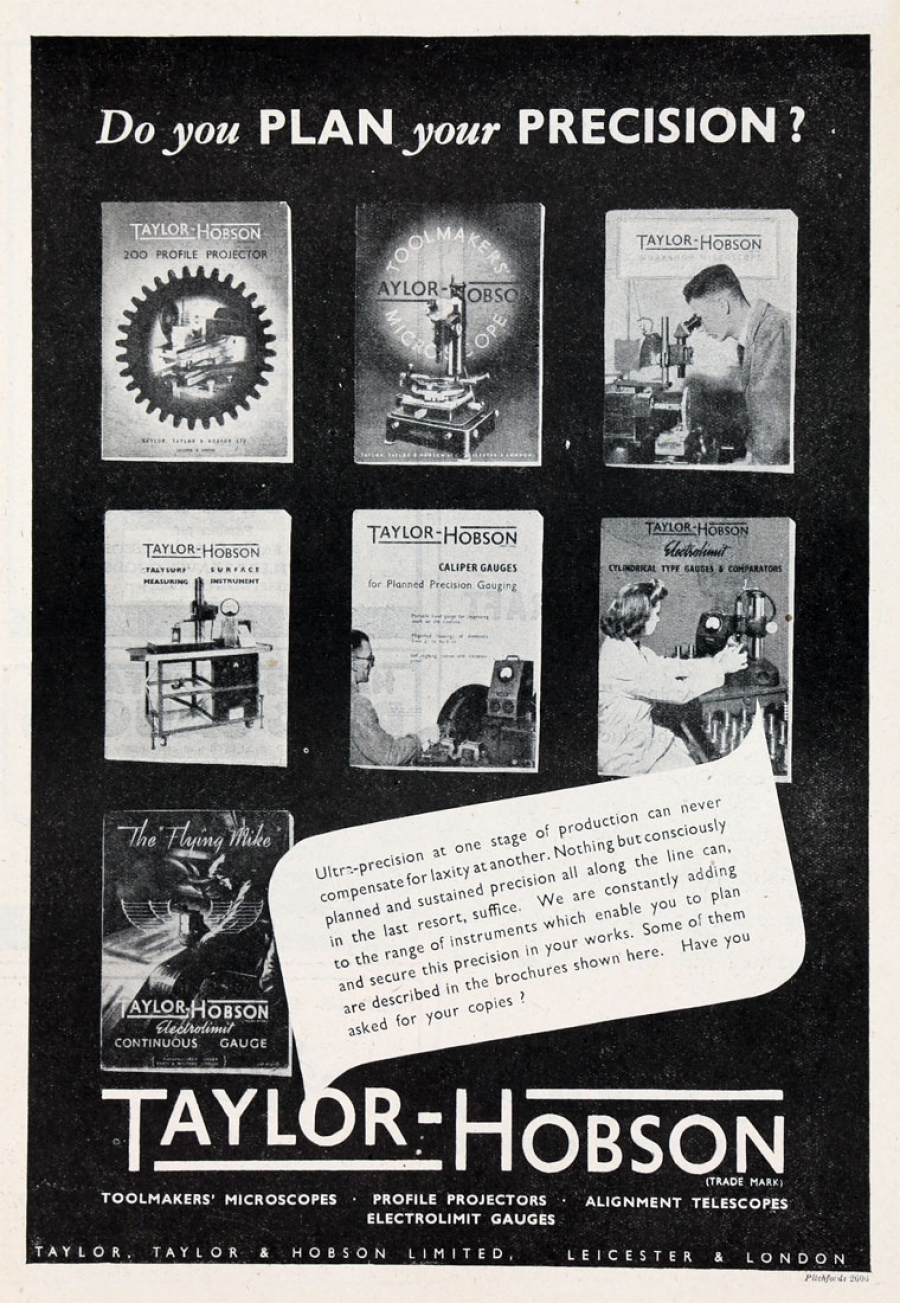 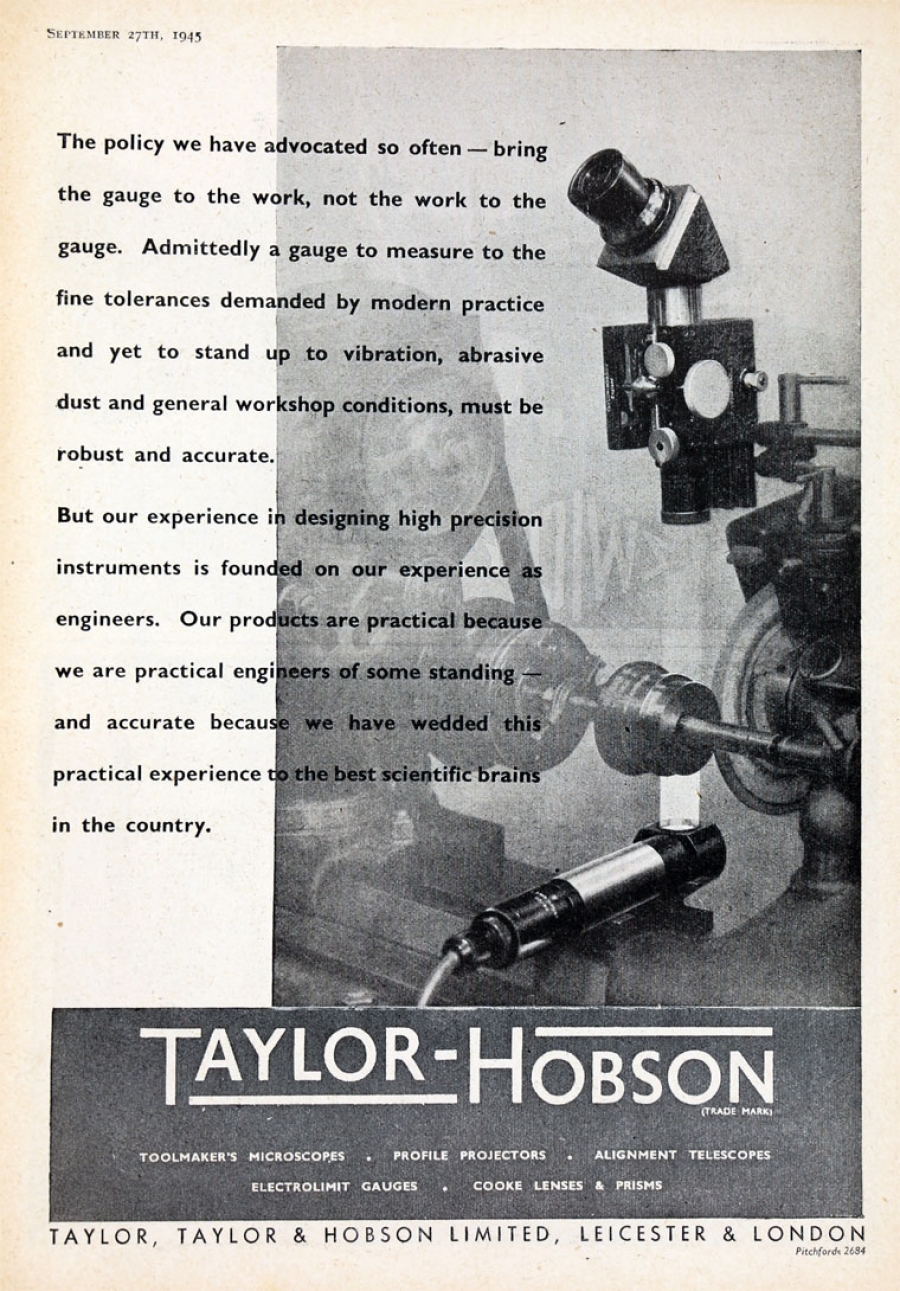 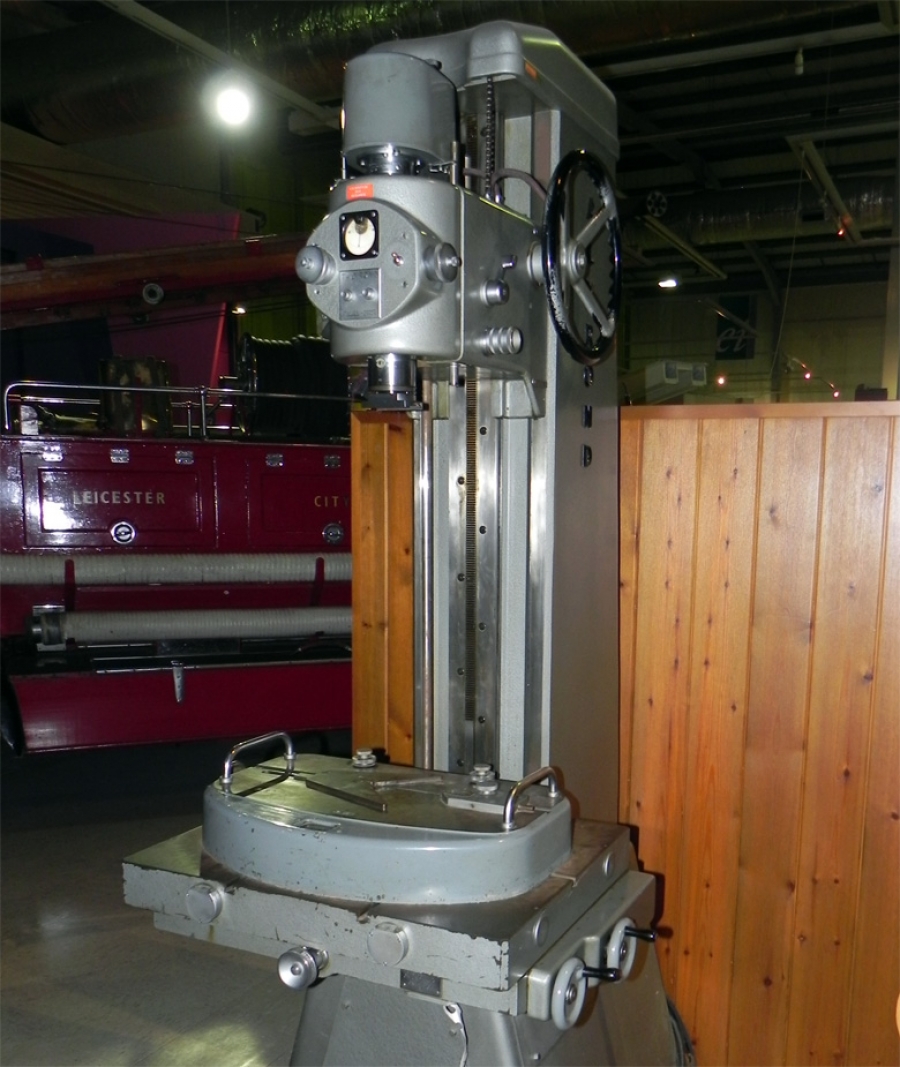 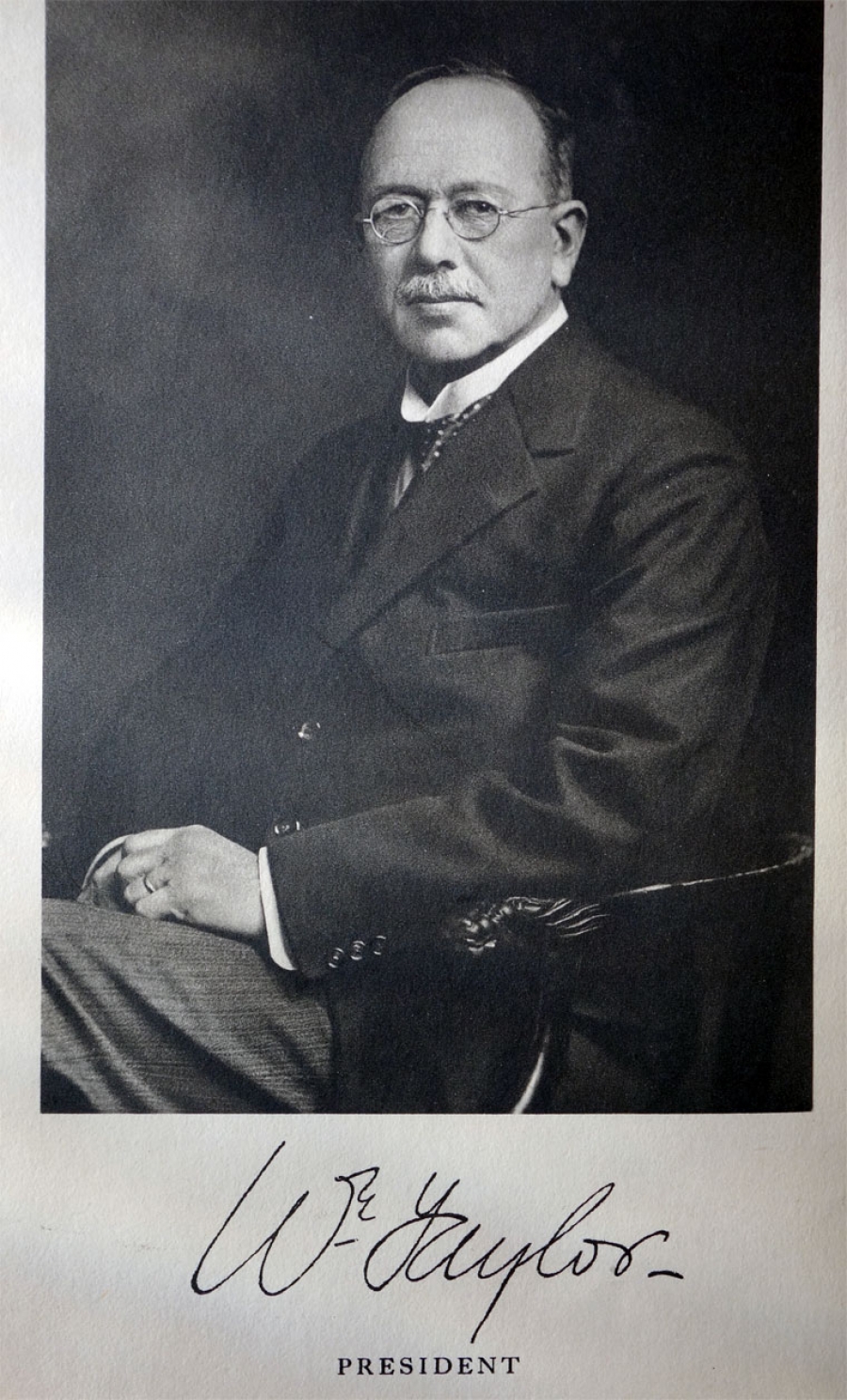 Sometime after 1901 Captain (Army Service Corps) Thomas Smithies Taylor and his wife Mary Ellen (née Bennett) moved first to Kibworth Harcourt, and subsequently to Westerby House in Smeeton Westerby. They remained at Westerby House for a decade until sometime after the Great War. Their three children were born during this decade or so.

Thomas, originally from Willesden, London, where he spent part of his apprenticeship at 'R & J Beck’, a noted firm of optical instrument makers who had first established a reputation for fine, high-powered microscopes[1], was recorded in the 1911 census, in Westerby House as a ‘scientific instrument manufacturer’. Taylor was initially an optician and had, with his engineer brother William (1865-1937), started a lens manufacturing company, Taylor, Taylor and Hobson, in Leicester in 1886. In 1893 they began manufacturing the ‘Cooke Triplet’ lens, which reduced chromatic aberration to a minimum. The Cooke Triplet lens set the standard and was used by professional and amateur photographers a-like, including T.E. Lawrence and Ernest Shackleton. By 1911 the company had indeed expanded to be a scientific instrument manufacturer, specializing in photographic lenses and other optical goods; engraving machinery and other fine tools, golf ball moulds, and time-recording clocks. [2]

On the eve of the Great War, Taylor, Taylor and Hobson was one of the British manufacturing companies at the forefront of the second industrial revolution of the late nineteenth and early twentieth centuries. And the history of the company would mirror that of the wider British economy as during this period the British lost their economic preeminence as Germany and the USA emerged to challenge her.

Taylor, Taylor and Hobson was in many ways crucial to the development of this new industrial revolution in that they pushed the known boundaries in manufacturing and in doing so opened up new areas for commercial exploitation. The company became involved in the design and production of machinery that enabled a new level of scientific precision in manufacture. Whilst other manufacturers worked to one thousandth of an inch, the Taylor brothers now took as their unit the ten-thousandth of an inch, pushing the boundaries of existing precision engineering. With time, the machine tool side of the business was to become as important as the optical side, with a range of precision measuring instruments that were unique worldwide. Taylor, Taylor and Hobson also pioneered new methods of mass production at their Leicester factory, that enabled them to mass produce camera lenses of such quality that they acquired a commanding position here and abroad.

The company’s operations were thus founded on science-based engineering, with an emphasis on precision and quality. It was also very much a family firm – in 1902 a third brother, J. Ronald Taylor, opened a branch in New York, with the principal customer being the Eastman Kodak Company. Closer to home, Thomas’ first son Garth, who studied at Bedales County Educational Proprietary Boarding School, Hampshire and accounting at the London School of Economics, spent time in Heidelberg learning German and then went to Berlin to a firm of camera and lens makers, with a view to entering the family business.[3]  Another son, Mark Herschel Taylor, also entered the firm in due course.

The company was also fortunate that William Taylor was an engineering genius and his wide interests allowed the company to expand the range of products it manufactured. A case in point is the dimpled golf ball. Advised by his doctor to take up golf to relax, William Taylor instead conducted numerous experiments using a wind tunnel to improve the distance a golf ball could be struck. His experiments led to the manufacture of the modern dimpled golf ball.[4]

With the outbreak of war in 1914, the company developed the "Aviar" lens for aerial reconnaissance from aeroplanes (previously the RAF had been reliant on German lenses purchased from members of the public). This new lens gave the allied air force supremacy in this field. The company expanded rapidly during the war manufacturing screw gauges and its famous field clinometer – an instrument for measuring elevations – which was to make the firm known “to practically every gunner in the army“. The new clinometer was cheaper, easier to use, more robust and output rose from 30 to 200 per week. They also contributed to the war effort by developing binoculars, bores for rifles and lenses for range finders. William was awarded the OBE in 1919 in recognition of his company’s achievements, with a Royal visit to the factory in Stoughton Street on 10th June 1919.[5]

In 1932, the company introduced the first Cooke zoom lens for cine applications. By 1939, Taylor, Taylor and Hobson claimed to have produced over 80% of lenses for film studios across the world.[6] So in some ways it might be said that the world witnessed the twentieth century through the lenses manufactured by this Leicester firm.

By this time the original founders had ceased to directly control the company. Thomas resigned as director in 1938 and William had died in 1937. Even before then, control of the company passed to an American company and like much of the British photographic industry, the company became part of Rank Organisation some time in the '40s. So again, the story of Taylor, Taylor and Hobson was reflective of the wider history of British manufacturing as it struggled to maintain its preeminence and independence in the face of growing foreign competition.

Accurate measurement continued to be core to the products and manufacturing processes of Taylor, Taylor & Hobson and during the Second World War the company manufactured several pioneering optical measuring instruments, including the Taylor-Hobson Alignment Telescope[7] and the Talysurf 1 – the world's first true surface texture measuring instrument. It became the standard for reference and controlling surface finish in the manufacturing shop. In 1949 the Talyrond 1, the world's first roundness measuring instrument was invented. Mentioned in one of the company’s many patents is Mark Herschel Taylor, Thomas’ second son, born at Westerby House in 1903.[8]

The company Taylor-Hobson is still in existence and you can learn more about the company on its website.[9] They now specialise in metrological equipment and software alongside their traditional interest in manufacturing lenses and precision instruments.

More in this category: « The Story of England Nellie Taylor »
back to top