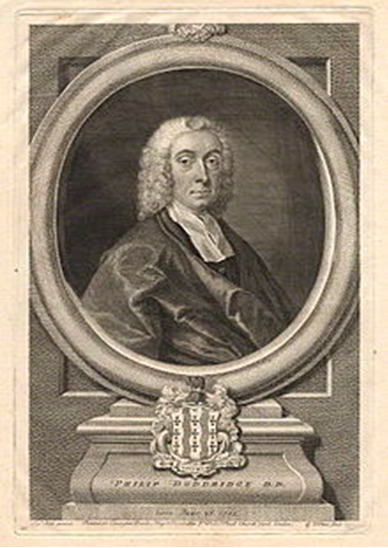 Philip Doddridge was born after thirty-six hours labour in London in 1702. He was the last of twenty children of Daniel Dandridge, a prosperous merchant, and his wife, Monica. Philip and his sister Elizabeth were the only survivors of the twenty children.

From an early age his mother began to teach him the history of the Old New Testament In his youth, Philip Doddridge was educated first by a tutor employed by his parents and he was later boarded at a private school in London.

In 1712 he attended a grammar school at Kingston-upon-Thames where he studied under the Rev Daniel Mayo.  In later life Philip Doddridge acknowledged the significance of Mayo’s influence on him.

Following the deaths of both his parents a Mr Downes, his late father’s business partner, assumed guardianship of Philip. Downes moved him to a school in St Albans where the principal was Dr Nathanial Wood, a Nonconformist Minister. Whilst at this school he became acquainted with Revd. Samuel Clark, a Presbyterian minister and he joined Clarke’s church.

His guardian Downs declared himself bankrupt having squandered the majority of Philip’s inheritance. Now destitute Philip was given shelter by his sister Elizabeth and her husband.

He felt called to the ministry but with his financial situation the opportunity of finishing his education had disappeared. However The Duchess of Bedford offered to finance his education providing he would promise to become an Anglican clergyman. Doddridge had set his mind on becoming a Dissenting minister and refused her offer. Samuel Clark then offered to finance Doddridge's studies and found him a place at a Dissenting academy in Kibworth Harcourt. The academy was situated at the rear of the ‘Old Crown Inn’, now ‘The White House’ on the right-hand side of the main A6 Leicester Road just beyond the Main Street junction, when travelling north.

The dissenting academy in Kibworth was founded in1715 and run by John Jennings.  Initially in Kibworth Harcourt until 1722 at which time the academy moved to Hinckley. Following the death of Jennings in 1723 the academy closed. Doddridge was one of the last pupils to complete Jennings’s course, and his correspondence from that time contains a wealth of information about the quality of the courses at Jennings’s academy. Jennings’s innovative teaching methods were scholarly and liberal, students were encouraged to read widely in philosophy, theology and history as well as receiving a thorough training in classical, biblical, and modern languages, mathematics, physics and geography.

In 1725 Doddridge moved to Market Harborough and whilst ministering to a rural community around Kibworth he continued a self-directed course of further education. Philip Doddridge opened a Dissenting academy in Market Harborough in 1729 and began to take a small group of students through a course of lectures based on those he had attended at John Jennings’s academy. His lectures were published after his death as ‘ A Course of Lectures on the Principal Subjects in Pneumatology, Ethics and Divinity’ .

In September of that year he received an invitation to become pastor at the Castle Hill Church, Northampton and after much thought and a lot of persuasion he accepted the post. In December 1729 he moved to Northampton and in the following year he opened an academy at Castle Hill.

Realising Northampton needed a hospital, Doddridge ran a successful campaign in 1743 with a newly arrived doctor, James Stonhouse, and they raised sufficient funds to establish the first infirmary by the end of that year.  Fifty years later in 1793, the infirmary was moved to a bigger site and is now Northampton General Hospital.  Both men are listed as the hospital’s founders.

Doddridge was a prolific writer. His book ‘The Rise and Progress of Religion in the Soul’ first published 1745 was translated into seven languages.  Reading this book led William Wilberforce, the anti-slave trade campaigner, to become a Christian. Besides a New Testament commentary and other theological works, Doddridge also wrote over 400 hymns of which many are in common use. Most of the hymns were written as summaries of his sermons designed to help the congregation express their response to the truths they were being taught. A well-known hymn of Doddridge's is ‘O happy day that fixed my choice, On Thee my Saviour and my God’. It was written in the middle of the eighteenth century and was originally entitled, "Rejoicing in our Covenant. Engagement with God". It was a fitting choice by Queen Victoria when one of the princesses was being confirmed.

Doddridge’s health had never been very good and in 1751 his health deteriorated due to tuberculosis and on the advice of his doctor he went to Lisbon. He sailed for Lisbon on 30 September 1751 however his condition did not improve with the change of climate and he died on 26th October 1751. Philip Doddridge was buried in the British Cemetery in Lisbon.