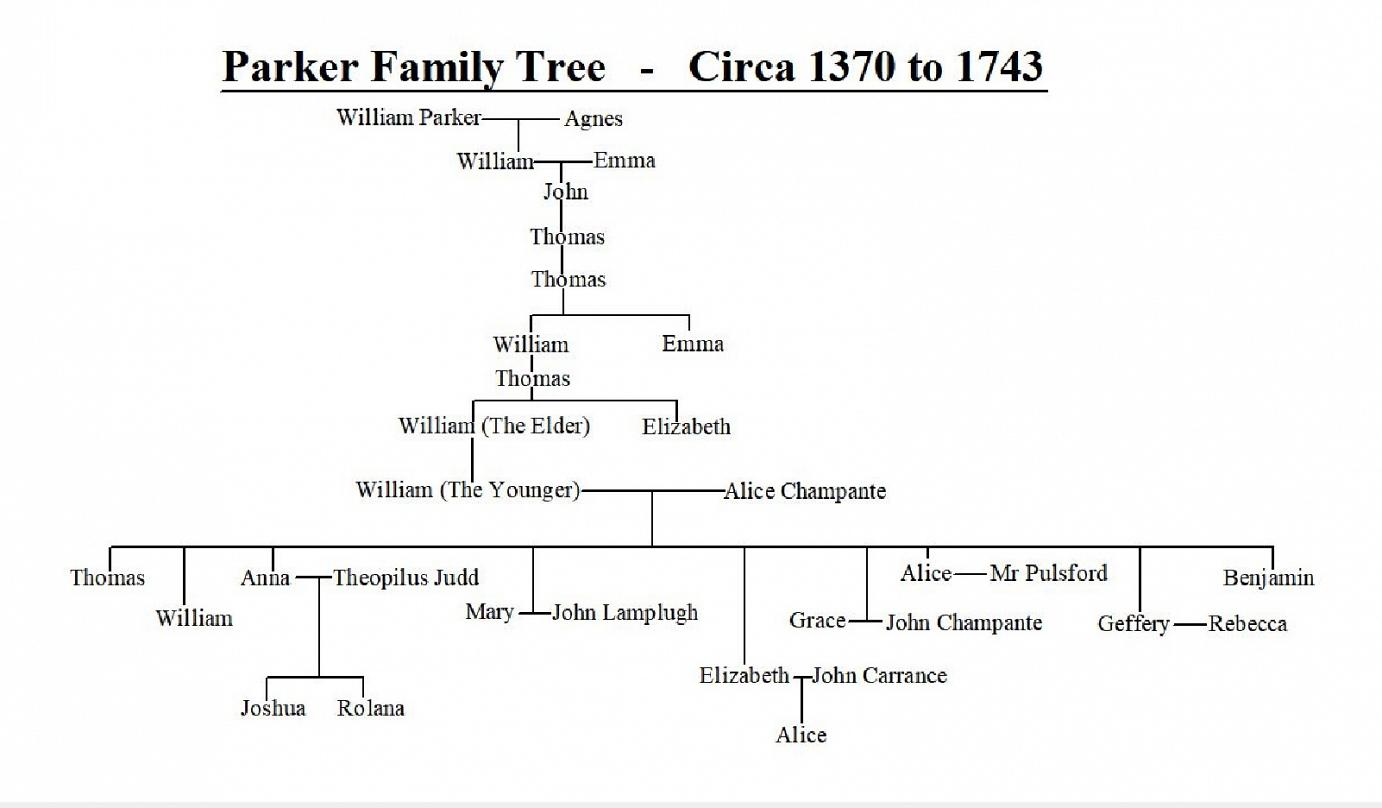 The first record of the Parker family in Kibworth Harcourt was in the manorial court rolls in 1370 when a William Parker and his wife Agnes were mentioned. From 1389 to 1397 William Parker was one of the 'supervisores terrarum et tenementorum' that is one of six tenants responsible for the day-to-day running of the manor. His son and heir, also named William married Emma and in 1397 like his father was recorded as one of the 'supervisores terrarum et tenementorum'. By 1407 he was appointed an ale taster, began to acquire land in Kibworth Harcourt and in 1428 became a brewer. By 1444 he held 11 acres, a messuage and a half virgate. William was succeeded by his son John who is first mentioned in 1428 following a similar path to his father, as a 'supervisores terrarum et tenementorum', brewer and he continued to acquire further land.
John was succeeded by his son Thomas who in turn produced a son and heir also named Thomas. This Thomas had a daughter, Emma, who from 1473 to 1485 was registered as a baker and brewer together with her father and she took full control of the brewing in 1503.

Thomas’s heir William born in 1514 inherited the estate in 1538. William had a son Thomas who succeeded his father in 1570 and in turn was succeeded by his son William (the elder) who in 1609 purchased the land where The Old House is currently situated.

There were several cottages on this land and by 1635 they had been replaced by a stone house which faced to the north (not the present Old House). The family resided in a mansion on Leicester Road, Kibworth Harcourt where the White House stands today. William had a son and heir William (the younger) born in 1645 who succeeded him and by 1678 had built the Old House. The Parker family continued to acquire land in the village over the years.

William married Alice Champante from Oakham in 1664 and they produced four sons and five daughters. Their second child, William appeared to be something of a rebel and in his last will and testament William (the younger) bequeathed an annuity to his second son William of twenty pounds per annum for his life and nothing more by reason of his wildness and in case of his safe return from Turkey wherever he is now gone, he died in 1693 and was buried in Kibworth. William’s last child, Benjamin, was born in 1689. The eldest son and heir, Thomas, was educated at Kibworth Grammar School and later at Cambridge University. When his father, William (the younger), died in 1699 Thomas placed a memorial to his father in St Wilfrid’s Church. Thomas died shortly after his father in 1702 leaving his brother Geffrey as the male heir. He married Rebecca and his sisters, Anna married Mr Theophilus Judd and had two children, Joshua and Rolana, Mary married John Lamplugh, an Attorney of Kibworth, Elizabeth married John Corrance and had a daughter Alice, Grace married John Champante and Alice married Mr Pulsford.

On Geffrey's death, in 1714, his estate in Kibworth included two mansions (The Old House and the stone mansion on the site of The White House), 3 cottages, 2 gardens, 2 orchards, 100 acres of land, 30 acres of meadow, 15 acres of pasture and common pasture for all cattle of Kibworth Harcourt.

Rebecca, Geffrey’s widow married Joshua Reynolds in 1716 and they ran the former Parker stone mansion (the site of the present White House) as the Crown Inn.

Jeffrey was the last male heir and with his death the Parker name in Kibworth died. Between 1737 and 1743 Joshua and Rolana Judd, Mary Lamplugh, Alice Corrance, Grace Champante and Alice Conant as surviving legatees of Geffrey Parker sold the estate to Thomas Peache, Attorney of Market Harborough.

There are two spellings of William Parker the younger’s third son, in the abstracts (pt.2) Geffrey and in the last will and testament’s of William the elder and younger (pt. 3) Jeffrey