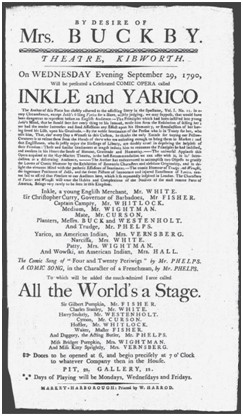 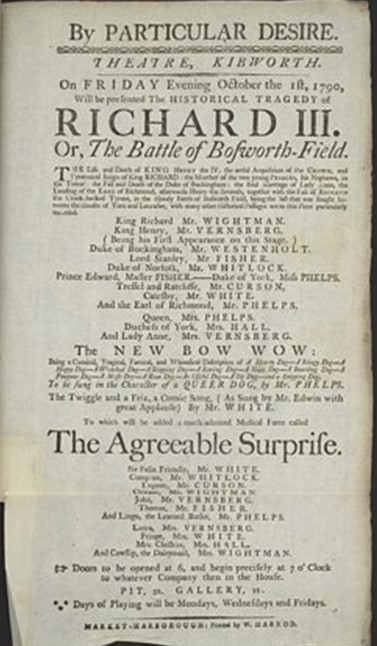 Kibworth is the birthplace of two people who changed the course of English literature and English education: Anna Letitia Aikin, who published mostly under her married name, Barbauld, and her brother, John.  They were born here, in 1743 and 1747, because their father, the Reverend John Aikin, kept a school in the house now known as the Old House. His son was one of his pupils. Anna Letitia, being a girl, could not enroll in her father’s school, but she learned much on the side, foraging in her father’s library and picking up knowledge from her brother.  Eventually she persuaded the Reverend Mr. Aikin to teach her some Latin.  She and her brother were very close from childhood until his death in 1822.  In a poem addressed to him she remembered that “hand in hand with innocence we stray’d / Embosom’d deep in Kibworth’s tufted shade.”  It was in Kibworth too, probably, that Anna Letitia developed a deep lifelong love of History. The passion for History, she wrote many years later, is awakened by curiosity about our own surroundings.  One bit of her surroundings that she must have seen many times from her front door was the Munt, a local mystery.  Was it Roman? Medieval? A fort? A tomb?

In 1758 the Aikin family removed to Warrington in Lancashire, for the Reverend John had been invited to join the faculty of a new Dissenting academy there.  At Warrington Anna Letitia began to write, and from there she published her first book, Poems (1773).  The book made her famous overnight.  But it might not have come to print without her brother’s urging and aid.  John Aikin, having taken a medical degree at Edinburgh, set out to have a literary career and brought his sister along.  After her Poems, brother and sister collaborated on a volume of essays, Miscellaneous Pieces in Prose (1773).  The two of them went on to be leading names in the literary world of London - and Anna Letitia became a famous name in the early United States as well. She did so through her books for children, published under her married name, Mrs. Barbauld: Lessons for Children (1778-79) and Hymns in Prose for Children (1781), written while she was teaching school with her husband in the village of Palgrave in Suffolk.  Lessons initiated treating the child reader as the main character in a story that is completely realistic because it is based on the child’s life.  Hymns in Prose encouraged the child reader to love Nature as the work of a loving divinity.  Both books are set in country villages like the village of Palgrave where they were written – and like the village of Kibworth, where Anna Letitia herself had learned to love Nature.

Anna Letitia went on to write further poems and essays, to engage in political controversy (a daring move for a woman in the 1790s) on the liberal side, and to work as a reviewer and editor.  She could be called England’s first woman of letters, something like the Virginia Woolf of her time.  Her brother, John, practiced as a doctor but moved over into literature.  He published on many subjects — medicine, poetry, politics, natural history - but was most influential as the editor of a national magazine in the 1790s, The Monthly Magazine, and a multi-volume biographical dictionary, a predecessor of today’s DNB.  He and Anna Letitia continued to collaborate; she contributed to his most popular work, a collection of tales and dialogues for young readers, Evenings at Home (1792-96, and many later editions on both sides of the Atlantic).

Late in life Anna Letitia published her longest poem, Eighteen Hundred and Eleven (1812), a lamentation over the horrors and human waste of the Napoleonic Wars. The poem was badly received by a public that had learned to view war as glorious and the war against France as necessary; today, however, Eighteen Hundred and Eleven enjoys the admiration of literary historians on both sides of the Atlantic.  It is respected as one of the major poems of its time.

In 1800 John Aikin revisited Kibworth on a holiday trip, but Anna Letitia never saw her birthplace again after leaving it at age fifteen.  After Warrington, John lived in Suffolk and the London suburb of Stoke Newington; he died there in 1822.  After Warrington, where she married Rochemont Barbauld in 1774, Anna Letitia lived in Suffolk and the London suburbs of Hampstead and Stoke Newington; she died in Stoke Newington in 1825.  She and John are buried there in the graveyard of St. Mary’s Church on Church Street.

Article kindly provided William McCarthy, professor emeritus of English at Iowa State University. He is the author of 'Anna Latetia Barbauld:Voice of the Enlightment' and co editor of 'The Poems of Anna Letitia Barbauld' 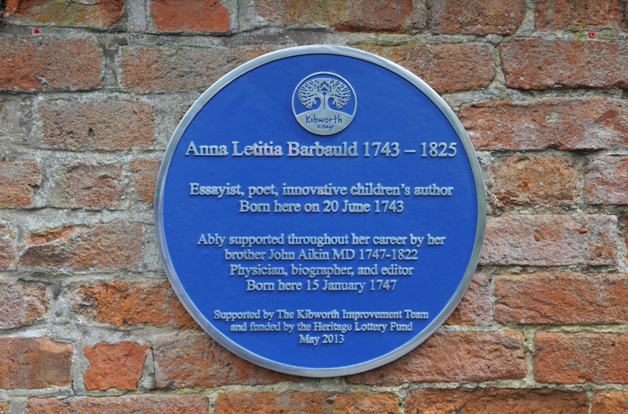 On Saturday 11 May 2013 a blue heritage plaque dedicated to Anna Letitia Barbauld and John Aikin was unveiled at the Old House, Main Street, Kibworth Harcourt. 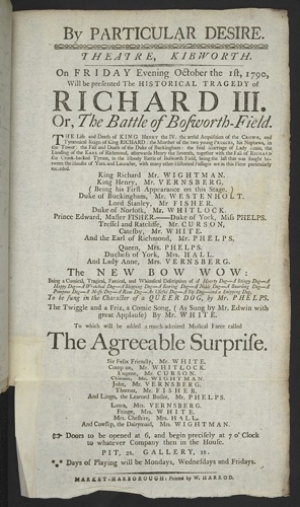